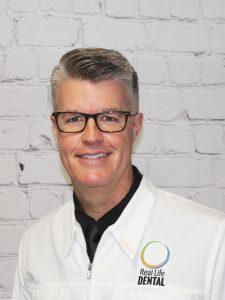 Dr. Damon Thompson is the Founder and CEO of Real Life Dental, which opened in March of 2010. Dr. Thompson’s Real Life Dental has been named as one of the “Best of the New River Valley” dental offices for several years running, as voted by the readers of The Roanoke Times. His passion is to provide the community with the absolute best dental experience available, by delivering the ultimate in technology, customer service, office environment, and dental services. He has been a Premier Provider for Invisalign and a member of the Doctors for Oral Conscious Sedation organization (DOCS) since 2010. His investment in the CEREC technology allows patients to receive necessary dental crowns in the same day, saving time and hassle for the patient. Dr. Thompson has partnered with the Dentistry From The Heart organization to provide an annual day of free dental services for those in our community who have limited financial access to dental care. The recent event in October 2017 provided care for over 100 patients in a single day.

Dr. Thompson is from the Town of Blacksburg, the son of Dr. Dan Thompson (retired). Upon graduating from Virginia Tech (1992), Dr. Thompson attended Virginia Commonwealth University’s Medical College of Virginia dental school, finishing magna cum laude in his Class of 1996. Damon accepted a commission in the United States Navy after graduation and completed a General Practice Residency at the Naval Hospital Camp Pendleton (USMC), CA. He served aboard the USS ARCTIC AOE-8 supply ship for two years as the ship’s only dentist. Once his military service was complete, Dr. Thompson returned to Blacksburg in 1999 to join the dental practice of Drs. Thompson and Schnecker. Real Life Dental was formed in 2010 with four employees; the company has now grown to over 30 wonderful team members, with more expansion planned in the future to serve our community.

Dr. Thompson has been married to his wonderful wife, Andi, for over 25 years. They have five wonderful boys: Ethan, Seth, Isaac, Luke, and Micah. 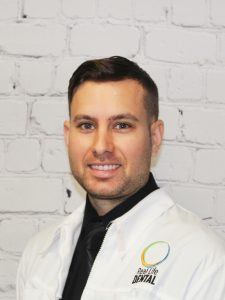 Dr. Matthew Hofrichter became an Associate Dentist at Real Life Dental in 2018. He completed his undergraduate degree at the Catholic University of America in Washington D.C. During his time in D.C., he spent six months in Barcelona at the Institute of the International Education of Students.

Dr. Hofrichter then attended the VCU School of Dentistry where he was an active member in community health. After graduating from dental school, he continued his education and completed the Advanced Education in General Dentistry program at the Medical University of South Carolina.

Dr. Hofrichter has used his time and skills to volunteer with Missions of Mercy, the Bradley Free Clinic in Roanoke, East Cooper Community Clinic and North Charleston Free Clinic, as well as mission trips in Jamaica. 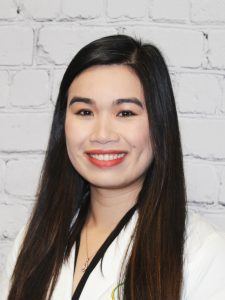 Dr. Que Le joined Real Life Dental as an Associate Doctor in 2019. She completed her undergraduate degree with a B.S. Honors Biology at George Mason University in 2013 and continued her education at the VCU School of Dentistry.

While at VCU, Dr. Le specialized in working with Spanish speaking patients, making quality service her priority. She participated in multiple Mission of Mercy Projects throughout Virginia to provide free dental care for underserved populations.

Dr. Le strongly believes in and supports oral health education for children. She has traveled to Belize to further this mission by providing free dental care and education to young children and high school students.

Dr. Le was born in Vietnam and her family later immigrated to the United States where they have lived in Annandale, Virginia for the past 23 years. In 2017, Dr. Le married her husband, Amit, and is currently taking care of her two children: Luna (dog) and Jazzy (cat). During her free time, she enjoys reading self-help books, meditating, working out, and spending time with friends and family 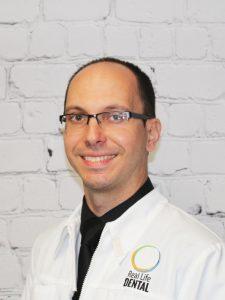 Dr. Erno (Edy) Fulop became an Associate Dentist at Real Life Dental in 2019. He received his first dental degree from the University of Debrecen Medical & Health Science Center in Hungary in 2007 where he graduated with honors.
Dr. Fulop then completed a General Practice Residency in Debrecen, Hungary. He also worked as an Assistant Clinical Professor at the University of Debrecen.

Dr. Fulop then moved to the United States where he received another dental degree from the University of Pennsylvania’s School of Dental Medicine in 2016. Following graduation, Dr. Fulop worked at a private practice in Williamsburg, Virginia before joining Real Life Dental.

Dr. Fulop can translate between English and Hungarian. He has used his translation skills during missions’ trips to care for orphans in Eastern Europe and continues to provide translation for patients today.

Dr. Fulop was born in Transylvania and his family later immigrated to the United States. He grew up in California, but upon marrying his wife, Kara, he is now proud to be a Virginian. 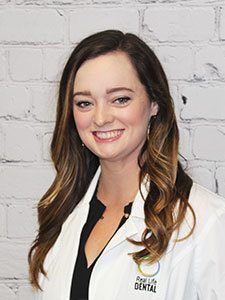 Dr. Combs then attended The University of Louisville School of Dentistry, where she earned a Doctor of Medicine in Dentistry.

Dr. Combs has a heart for the mission field and taking care of those in need. While in dental school, she led and participated in several Christian Dental Society Mission Trips to St. Elizabeth, Jamaica. She also spent a month on the Seneca Nation’s Indian Reservation in Irving, New York, as an extern in their dental clinic.

Dr. Combs strives to provide every patient with a beyond-exceptional dental experience from the time they walk in the office and throughout their treatment. Dr. Combs is passionate about educating her patients on the link between oral health and total body health. She is a member of the American Dental Association®, Academy of General Dentistry, and the American Academy of Cosmetic Dentistry.

Born and raised in Louisville, Kentucky, Dr. Combs is excited to experience all that Virginia offers.

Dr. Combs’s commitment to health and wellness extends beyond the dental office. When she’s not creating smiles, she enjoys exploring the outdoors with her Golden Retriever, Biscuit.

Her other interests include cycling, traveling, skiing, group fitness classes and cooking. 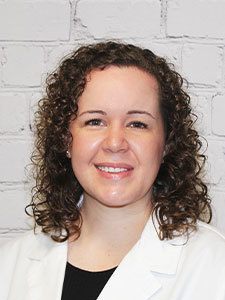 After graduating with her Bachelor’s degree in Public Health and minor in music from Brigham Young University in Provo, Utah, she continued her education at the Virginia Commonwealth University School of Dentistry.

While at VCU, Dr. Neubert was awarded the Dentsply Sirona Merit Award for excellence in removable prosthodontics. She was the recipient of Merit Scholarships in 2017, 2018 and 2019, and received the Eastern Dental Insurance Company Endowed Scholarship in 2019.

Dr. Neubert is fluent in Spanish, and is a member of the American Dental Association® and the Virginia Dental Association. She has enjoyed serving the community through Missions of Mercy projects and Give Kids a Smile days.

Beyond her love of dentistry, Dr. Neubert enjoys spending time with family and is active in her faith. When not in the office, she enjoys running, hiking and playing the piano. 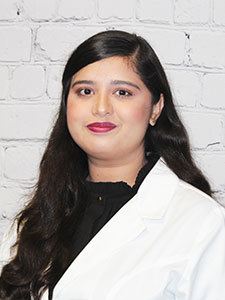 She was born in Karachi, Pakistan, and moved to United States when she was 15. She graduated from Fayette County High School in Fayetteville, Georgia. Dr. Khan received her Bachelor of Science in Biology from University of Georgia (Go DAWGS!). Dr. Khan was a recipient of Georgia Hope Scholarship for four consecutive years during her undergrad at UGA.

She knew she wanted to be a dentist since she was 13; because, she loved the fact that dentist can help people smile again. She attended Virginia Commonwealth University to receive her Doctorate of Dental Sciences. At VCU, she received United Concordia Dental Scholarship in 2019, and General Scholarship during the years 2018 and 2017.

She understands the lack of care in underprivileged communities as she has witnessed it firsthand while growing up in a third world country. She strongly believes in giving back to the community and has done so by participating in community programs such as Mission of Mercy Projects in Virginia and Georgia, Give Kids Smile a Day at VCU, and international dental trip to Jamaica.

She married her childhood friend, Ebad. They love shopping at IKEA and watching The Office on Netflix. #worldsbestbossmichealscott.

During her free time, she loves to cook traditional Pakistani cuisine and like to experiment with it by introducing western cuisine cooking style into it.

What Do Our Patients Say?

Read some of our reviews and see for yourself why our patients LOVE us!